When bad gets worse

BART has been delayed pretty much everyday the past week.  This morning, there was a 12 minute delay from 925 area code stations to SF.  We all know delays means crowded trains.  We usually all make that work by being uncomfortably close with other passengers but heck, keep your head down, mind your own business, and we all get to work within the hour.  It's fine.  We deal with it.

Today, it was also crowded but what made the ride unbearable were two people taking advantage of the extreme proximity to make out.  Yes, they are a couple, but with the lack of fresh air and space already in the train, they really did not need to show their affections so fervently and so publicly.  I was luckily 5 feet away from them but there was one man whose face was about two inches from their lip lock (actually tongue lock, I should say.)  The man had no room but to stand facing them.  It must have been incredibly uncomfortable for him to be part of that exchange.  So unsightly, I don't care who you are, don't make out on BART, especially when we are forced to see it.

But my commute gets worse.  And the second part I can't blame BART for at all.  I finally got to my building and got on to the elevator.  The elevator didn't move, it also wouldn't open again.  It pretty much just stayed still.  A buzz alarm went off in the elevator and the door still would not open.  The elevator just stayed still with the doors shut.  I thought someone from the outside would sure need an elevator and the door would open soon enough but as I heard other elevators open up and close, I started to panic a bit.  By then I had been in there for more than two minutes.  It was another minute before it finally opened up but I was dialing my office manager to seek help from security.

Monday morning commutes are always eventful.  Let's hope I don't get stuck in an elevator again this week.


Posted by bartmusings at 2:34 PM No comments:

Seriously, if I weren't two stops away from my exit, I might have risked my life to say something.  We all need to stretch but this? Seriously?  Can you see me (dark denim on bottom left) try to move my leg as far as possible to his shoe?? 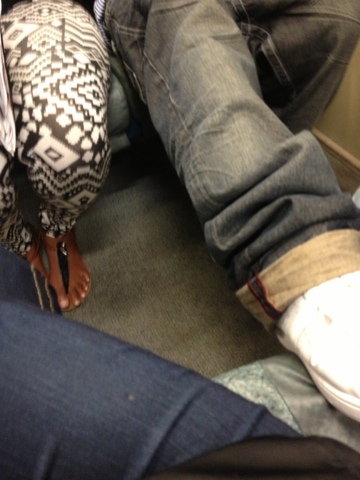 Posted by bartmusings at 4:26 PM 2 comments: